1350 the property “sub eben apud tanzstatt” in Ybbsitz is mentioned in a document for the first time.

1550 a ladle hammer is founded on this property.

1890 the blacksmith’s store becomes a metal drawing and spinning plant.

2000 Dipl. Ing. Julian Riess, Ing. Friedrich Riess and Susanne Rieß take over the management of the family business in the ninth generation.

2001 The KELOmat brand is taken over. The company is the only cookware manufacturer in Austria.

2005 The export business is expanded. The company delivers to more than 35 countries worldwide.

2009 Start of cooperation with design office dottings and launch of the product line truehomeware.

2016 Construction of the fourth power plant 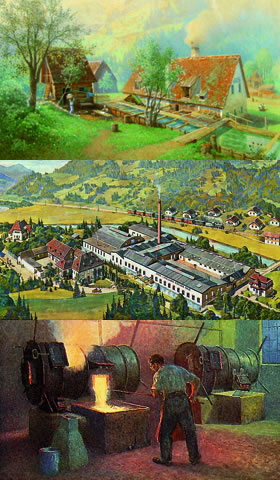